The Holu Hou approach combines a unique architecture and technology tailored to that architecture with a contractual approach that opens up distributed energy generation opportunities across tens of thousands of homes in Hawai‘i alone that have bare roofs because of numerous barriers. This session explains what these barriers are, and how Holu Hou has removed them. 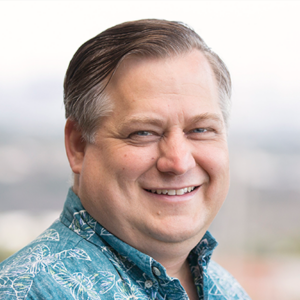 Ted has three decades of leadership experience including development of the Hawaii Clean Energy Initiative as the state’s Energy Administrator. He has negotiated over 75 power purchase agreements, including multiple projects in low-income communities. With previous experience as an area general manager at Johnson Controls and a principal at Booz Allen Hamilton, he has been a PBN “Forty Under 40,” a Pacific Century Fellow, and one of the state’s “20 Leaders for the Next 20 Years.” Ted is a retired nuclear submarine officer and studied physics at the United States Naval Academy.